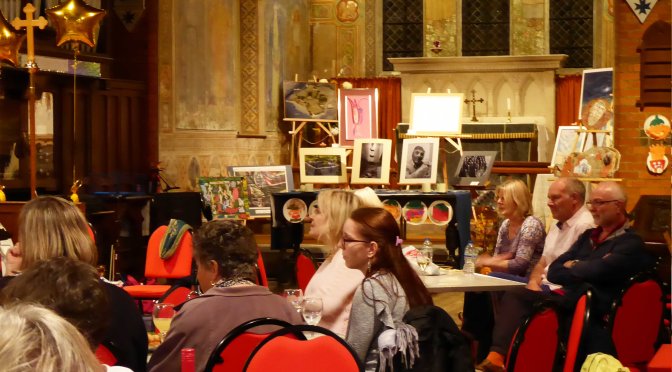 On the weekend of 20-22nd October St Mark’s held an Arts Festival, organised by the energetic and talented Bob and Lesley Shatwell. It consisted of an exhibition, concert, workshops, ceilidh and festival service… a mesmerising, colourful exuberant weekend celebrating art and the people of this parish. Here are some photos:

It would be nice to think that the practice of religion could be conducted without having to worry about such secular items as paying bills and general self-sufficiency. However, unless you’re going to go out in the desert, climb up a pole and generally shun society to conduct your devotions, this is unlikely to be the case.
Basically any church, regardless of denomination requires the congregation to contribute to its upkeep. The Church of England, even though it is the established church with the monarch as its head, is no different in this regard. We get no contribution from the diocese, from central government or the extensive royal estates.
The parish budget is divided roughly into two areas: the general fund, which deals with the day to day running expenses, including salaries; and the restricted funds which are reserved for specific purposes, e.g. building repairs or outreach. It all comes ultimately from the contributions of parishioners.

You may have heard people talking about “the Parish Share”. This is the major outgoing part of the general fund (about 65%). It goes to the diocese. Most of it comes back in the form of salaries of clergy and their housing. A smaller part is associated with such things as training and diocese administration. The ability to pay the parish share is regarded as an indication of the viability of the parish. We’ve managed for the last three years. It’s going to be a challenge this year.

This year, the budget predictions indicate a general fund expenditure of £104,000 and an income of £84,000, a shortfall of £20,000. We also have a problem with the special funds, particularly the part associated with building maintenance. We’re almost out of money here, after carrying out necessary repairs and modifications to each church.

On a personal note, when I was studying the figures in order to give a presentation on this problem to the churches recently, I looked at my own monetary contribution. I thought it was quite substantial. However, I then figured out how much I spent per week on coffee in various establishments and car parking charges in Farnham and Guildford etc. The amount I give to the church is comparable, or possibly slightly less, than these numbers. I think the parish is arguably more deserving, and certainly has a greater need of my money, than Starbucks!

You will be able to make similar comparisons based on your own lifestyles.

The most effective way to give is via the parish giving scheme. This is a direct debit system. If you are a taxpayer you have the option of donating gift aid. You can also choose to index link your contribution. If you don’t pay tax, we can claim tax relief on the amount collected in the collection plates, so you may want to consider this option. We would prefer to phase out the old collection envelope scheme, as it costs a lot in both time and money to administer, and technology has moved on since this was regarded as the clever way to contribute.

So, come on everybody. If we look at the numbers attending the church, we are a growing parish. However, the income isn’t reflecting this. I’m afraid the days of putting loose change in the collection plate are long past. I’m significantly increasing my direct debit, or, as Alan Crawley neatly, and delightfully ambiguously, summarised when I gave my presentation to St Mark’s,