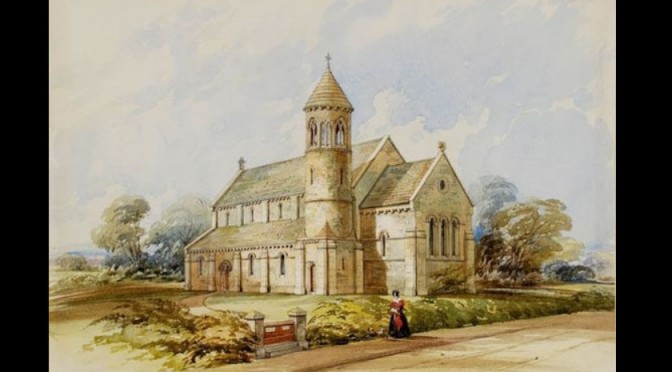 In this 175th anniversary year many new and interesting documents telling the story of St John’s have been found. Below is a press cutting, thanks to Bob Skinner, telling of the consecration of St John’s on 8th November, 1844:

In addition, our church architect has found some plans. Below is the original plan of the church and then the plan of the extended church in 1897 (you can read the appeal for fundraising for the extension here):

There was a dedication service at St John’s, after the extension and thanks again to Bob Skinner, the cutting is here (it is difficult to read so I have also typed out the words):

The chancel of the parish church of St. John, which has been enlarged and improved as a jubilee thankoffering was re-opened by the Bishop of Winchester at a special service on Saturday afternoon. The work was commenced in November 1894, and completed at the end of last month. The chancel has been extended towards the nave, and an iron screen on a low kerb wall has been placed at the entrance. Permanent choir seats and clergy desks have been provided in oak in the increased space, and the pulpit and lectern have been removed to the nave. The renovation in the chancel also consists of a mosaic reredos. The new transept has been erected over the tomb of Bishop Sumner, who was interred with his wife on the south side of the chancel in 1874. The organ has been placed in the transept, the opening to which on the east side is near the altar rails. The super-altar was on Saturday adorned with vases of white flowers. A very large congregation had assembled for the dedication. The service was opened with the singing by the choir of the 84th Psalm as the Bishop and clergy entered the church from the vestry and proceeded to the chancel.  His lordship was attended by the Rector of Farnham (the Rev. C. H. Simpkinson), and the Rev. C. E. Hoyle (chaplains), and the following clergy: Revs W. H. Moody, R. D. (Frensham), G. E. Hitchcock (Hale), G. J. C. Sumner (rector of Seale), R. J. S. Gill (vicar of Aldershot), J. De Verd Leigh (incumbent Holy Trinity, Aldershot), J. D. Henderson and E. D. Finch-Smith (Farnham), J. W. Pickance, A. E. Algar, and G. Bentham (Aldershot), and South Phillips (Hale). Coral evensong was conducted by the Vicar of the parish and the Rev. A. South Phillips, Tallis’ music being used for the responses. The special Psalms were the 24th and 150th. The Rev. C. H. Simpkinson read the first lesson and the Rural Dean the second. Following the singing of the anthem, “Break forth into joy,” by Nimper, the Bishop said the special prayers of dedication. His lordship preached from the text St. John c.10. v. 22. He said it was not merely an accident when they used the word dedication in association with the fact of their service that day. There was a close association with the ceremony which took place where our Lord was as described in the text and with that in which they were then engaged. They were that day not merely commemorating the building of a large place, but were taking part in a service to show that it should be beautified and made appropriate for divine worship and best fitted for the great end for which it was set up. They were that day offering afresh to God a church more worthy for the ministers and those who worshipped. A church like that in a parish which was likely to become populous must bring the solemn thought that in ages ahead men, women and little children would come there and would remember that others had obtained help in their daily life in the years before. He trusted that he and they might be making a difference for those who were yet unborn and who in the ages far ahead would come to worship within those walls. The offertory, and also that on Sunday, were in aid of the building fund. Mr E Caesar, who presided at the organ, played a march by Theo Bonheur at the close of the service.

The painter of the beautiful picture above of St John’s when it was first built is not known.

One thought on “Consecration of St John’s, Hale”