The villages of Badshot Lea, Hale and Weybourne were visited last Friday evening (December 20) by a host of angels, as well as a crowd of shepherds, sheep, kings, musicians, donkeys and a young couple in search of a place to rest and give birth to a baby.

They were all taking part in A Journey to Bethlehem, a re-enactment of the Christmas story in which two groups walked from St George’s and St Mark’s to St John’s, playing music and singing carols on the way. Along the two routes they met angels, shepherds, inn keepers and kings and followed a star – and two donkeys, kindly lent for the occasion by Folly Oak Donkeys – until they reached a stable constructed outside St John’s where baby Jesus was lying in a manger.

This was followed by a celebration in the church in which children recounted what they had seen on the journey and Cllr Alan Earwaker, Farnham’s Deputy Mayor, joined everyone in singing carols and playing the kazoo, before the evening ended with prayers, hot chocolate, mulled wine and mince pies.

“This was the first time we had tried A Journey to Bethlehem and what a wonderful celebration it was!” said Lesley Crawley. “It was lovely to see children and adults alike dressed up as some of the characters we read about in the Bible at Christmas, and to see everyone having such a joyful time. We are living in an age of division and anxiety and the story of God coming to earth in the form of a child, born into poverty in an occupied country, is one that can bring us hope and light. We wish everyone that hope and light this Christmas.” 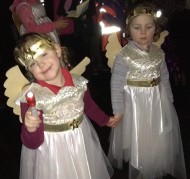