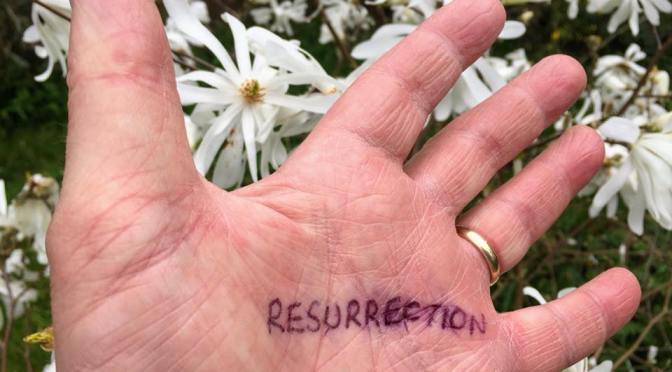 Welcome to the third Sunday of Easter. To me, Easter never seems to be a very meaningful name for the most momentous event in the history of our world. The resurrection of our Lord and Saviour, Jesus Christ from the dead. Christ is Risen! He is risen indeed! Alleluia! Resurrection – what a word. What a fact! Should we rename Easter Sunday as Resurrection Sunday? You’ve heard of being an Easter church, an Easter people. But what would we think of ourselves if we took seriously the fact that we are Resurrection people, living and witnessing as a resurrection church? In today’s gospel reading we hear another episode of the Risen Christ appearing to his disciples. Jesus appeared to them and said, “Peace be with you.” They thought they were seeing a ghost and were scared half to death. But he reassured them, “Don’t be upset, and don’t let all these doubting questions take over. Look – my hands; look at my feet – it’s really me. Touch me. Take my hand. Look me over from head to toe. A ghost doesn’t have muscle and bone like this.” As he said this, he showed them his hands and feet. Jesus was still Jesus.

They still couldn’t believe what they were seeing. It was too much; it seemed too good to be true. He asked for something to eat.

So they gave him a piece of leftover fish they had cooked earlier. He took it and ate it right before their eyes. Spooks don’t eat. Jesus really was Jesus. New. Fresh. Alive. It was Him. Resurrected. Still him, but different. Who didn’t feel that little bit more alive on Saturday, as what seems to have been a long sluggish winter suddenly gave way to the newness of spring? I saw our Magnolia tree which is in full bloom and was moved to ‘wow’-ness: Resurrection beauty: my heart gave a leap of joy and I said ‘God, you’re amazing’! This is resurrection. The old has gone, the new has come! Winter is over, summer is coming. Christ is Risen! He is risen indeed! Alleluia!

So what is resurrection? Well, it’s not resuscitation! In the Creed we say that he was killed on a cross. Under Pontius Pilate – it actually happened in history. There were witnesses. He was thoroughly dead. Buried in a new tomb. He descended to the dark place of the dead: the Lord of Life takes on the Lord of Death and is victorious. The Gospel is preached to those in hell. Jesus has destroyed death and its dominion. And miracle of all miracles, Jesus rose from the dead. Christ is Risen! He is risen indeed! Alleluia! We have this idea that the Resurrection of Jesus is somehow the end of the story. Maybe because it comes at the end of the gospels. But actually, this is just the beginning. This is something new, which has reshaped our world forever. The book of Acts, also written by Luke, is ‘part two’ of his gospel. It’s the continuing story of the resurrection.

Traditionally, we’ve understood the resurrection as Jesus having secured somewhere else for us to go when we die: heaven. But the resurrection was a cosmic event. Creation in entirety. It’s not just about us: in Revelation we hear of a new heaven and a new earth. The same ones – but better. The entire creation. Enhanced. Renewed. Restored. Resurrected. Resurrection is now, not when we hear the pearly gates clang shut behind us after we have died. It has already begun. Here. Now. Christ is Risen! He is risen indeed! Alleluia! In all the messiness of life, we can see glimpses of glory. In pain we can find hope. In desolation, we can find consolation because He is risen. Resurrected. Alive.

Jesus went on to say to his followers, “Everything I told you while I was with you comes to this: All the things written about me in the Law of Moses, in the Prophets, and in the Psalms have to be fulfilled.” He went on to open their minds to the power of the Word of God, showing them how to understand what had taken place. How it is written that the Messiah suffers, rises from the dead on the third day, and a new way of life of sins is proclaimed in his name. He says “You’re the first to hear and see it. You’re the witnesses”. You are my resurrection people.

Whilst I was cutting the grass yesterday, I reflected that creation began in a garden. Beauty. Order. Fellowship between God and Humans….but we know the rest of the story. This story was embedded in the hearts and minds of God’s people, the Jews. In his gospel, John tells us that Jesus was buried in a new tomb… in a garden. This image is loaded with meaning. Re-creation – resurrection – began in a garden. On the first day of a new week. Resurrection is now. Despite the darkness and cruelty in today’s world, where evil seems to be particularly rampant. Despite the lack of vision in our politicians, and the defense of the status quo and the poverty and pain around us.

The fact of the resurrection should radically reshape our hearts, minds, and world-view. That new creation is here. Right under our noses. And we should live in the light of that knowledge. In Acts, the disciples had taken this radical fact of Jesus rising from the dead to heart and became fearless witnesses to the reality of resurrection. Absolute hope in an uncertain and very dangerous world.

So my final point is this: we have our Vision Meeting following this service. Perhaps we should ask the question: what am I bringing? is it just my thoughts, my preferences? Am I happy with things as they are, will it see me through until I’m gone? Or dare I think like a child of the resurrection? That here new life is now. Hope is now. The reality of Jesus Christ among us is now. I’ve written ‘resurrection’ on my hand to remind me of that when my mind feels the need to get a bit parochial! he reassured them, “Don’t be upset, and don’t let all these doubting questions take over. Look – my hands; look at my feet – it’s really me. Touch me. Take my hand. As a church, lets take him at his word. Put our hand into his, and fearlessly be the resurrection church in our village. A beacon of hope. A people of hope. A people whose song is “Christ is Risen! He is risen indeed! Alleluia!” 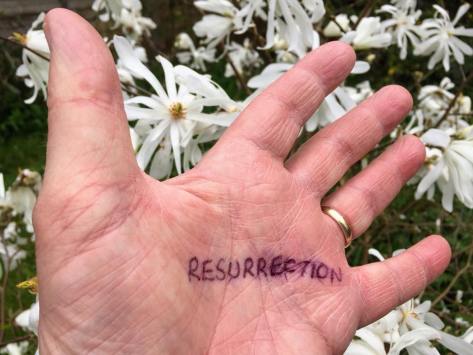