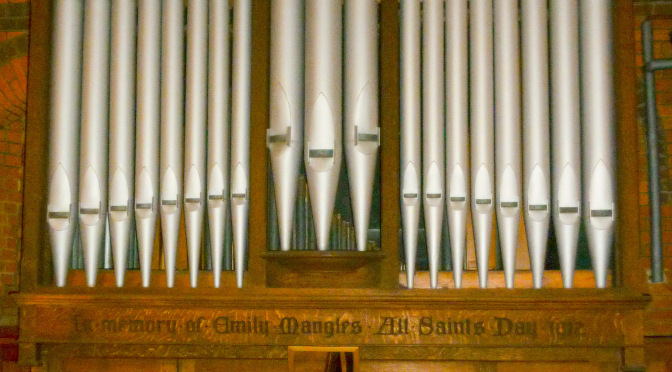 Emily the Edwardian organ will take centre stage in a ‘Christmas Carol Extravaganza’ concert at St Mark’s, Hale, on Saturday, December 14 at 11am, thanks to the generosity of many local people.

Carols as you have never heard them before will be played on this much-loved organ, which has been renovated following a fundraising appeal. Anyone who donated at least £10 to restore Emily has been invited to the concert which will be followed by a free lunch. However, some tickets are still available at the door – just come along at 11am on December 14 for a festive concert plus lunch.

Emily the organ is named after local benefactor Emily Mangles who left money for it to be installed in St Mark’s Church in 1912. Over the years the organ had begun to deteriorate and an appeal was launched to restore it. An initial £23,000 was raised for the restoration work but when this took place in the summer, some further problems emerged costing a further £2,000. An appeal was launched and many people responded generously.

Lesley Crawley says: “Thank you everyone who has given money to restore this lovely organ which means so much not just to the church but to local villagers past and present. And do come and join us to celebrate the restoration at our Christmas Carol Extravaganza on December 14. I know you are in for a treat as some very skilled organists show just how versatile and fun organ music can be.”

The Christmas Carol Extravaganza and lunch will take place at St Mark’s Church, Alma Lane, Hale, GU9 0LT, from 11am. Please bring donations to the church or you can also give online at https://www.justgiving.com/crowdfunding/help-emily-the-organ

One thought on “Emily’s extravaganza”