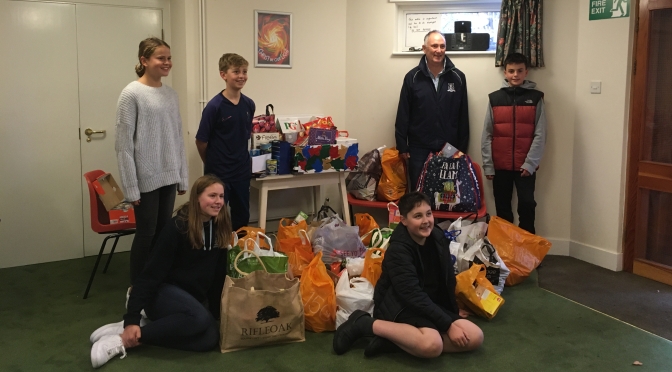 It feels like a dark and anxious time at the moment with deep divisions in the country and real fears for the future, especially for those already on the edges of society. However, from time to time something happens which shines a light into the darkness.

Such a light was shone when, on Friday, October 11,  some unexpected visitors turned up at St Mark’s. Five pupils and a member of staff from Edgeborough School arrived, unannounced, in a van stuffed with bags and bags of food for the Farnham Foodbank. They had collected the food as part of their Harvest Festival celebrations and had given with huge generosity.

The six of them unloaded the van, piled the food high, stopped for a brief photo, and disappeared again, leaving behind more than 220kg of food. We didn’t even know their names and they won’t know the names of the people who receive their gifts. It was a real moment of unexpected light and sharing between strangers. Thank you!

It shouldn’t be the case in 21st-century Britain that people have to rely on foodbanks but that is a reality for increasing numbers of families. Between April 2018 and March 2019, for instance, the Trussell Trust’s foodbank network, with which the Farnham foodbank is associated, distributed 1.6 million three-day emergency food supplies to people in crisis, a 19 per cent increase on the previous year. More than half a million of these went to children. The Farnham Foodbank itself gave 1,499 three-day emergency food supplies to people in crisis last year.

We are all vulnerable to crisis, none of us intend to be. But sometimes, like Blanche Dubois in A Streetcar Named Desire, we find ourselves depending on ‘the kindness of strangers’. And when Jesus was challenged in Matthew 25 to answer “Lord, when did we see you hungry and feed you, or thirsty and give you something to drink?” he replied: “Whatever you did for one of the least of these brothers and sisters of mine, you did for me.”

A heartfelt thanks to Edgeborough School and all those who donate to Farnham Foodbank.