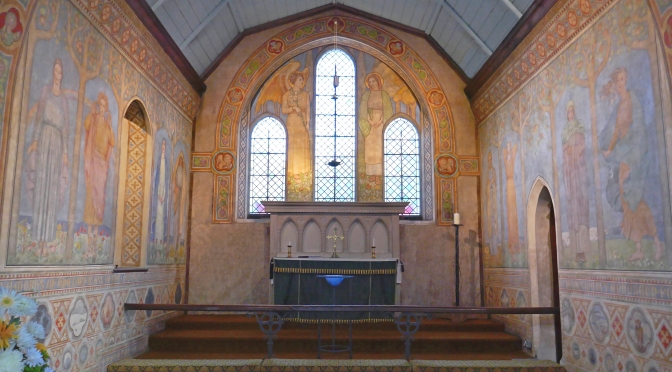 We are delighted to announce that St Mark’s is now a Grade II listed building.

Historic England this week named St Mark’s as one of the “most captivating places across the South East” and praised its “stunning” murals, painted by Kitty Milroy between 1911 and 1920.

The murals were restored earlier this year by wall painting conservationists Rickerby and Shekede and new lighting has been installed to show them off to their best advantage.

Kitty was an intermittent student at the Slade School of Fine Art in London. The Slade was noted for turning out a number of talented young muralists and Mary Sargant Florence, a major woman artist and muralist, led a fresco and tempera painting course there. There are records of Kitty exhibiting paintings both locally and in London, and drawings of the St Mark’s frescos were exhibited in the 1923 Winter Exhibition at the Royal Academy. Her only other known fresco scheme was in the chancel of the chapel at St Elphin’s School in Matlock, Derbyshire, which she painted between 1921 and 1931. These frescos were lost when the chapel was enlarged in the early 1940s.

The side walls and east end of the chancel at St Mark’s are covered in colourful paintings of religious scenes, including the Annunciation. Milroy’s imagery appears to draw on works by Botticelli such as Primavera and Birth of Venus. Her depiction of The Song of Creation blends personifications of elements of the natural world with imagery taken directly from her surroundings, from local landscapes and flora to the faces of fellow congregation members. The figure of ‘Water’ is believed to have been modelled on the Milroy family gardener, Edwin Thomas Warner.

Heritage Minister Nigel Huddleston explained that listing St Mark’s and other historic sites is a way of protecting “our valuable heritage for future generations to learn from and ensure they are on the map for local people and visitors to be proud of and enjoy.”

Lesley Crawley, rector of the parish, added: “We are thrilled that St Mark’s has received this accolade. The murals are a real gem and we are really thankful that Kitty Milroy’s art and skill are being recognised. She was a truly gifted artist and the murals are stunning examples of her work and a testament to her faith as they depict joyful psalms and biblical scenes as well as the Benedicite, also known as the Song of Creation. The murals are also significant from the perspective of local history as the people who modelled for her were local villagers and we are gradually discovering who they were.

“We welcome people to come and see these beautiful works of art and the church which was built in the 1880s to serve the village of Upper Hale and is still serving the local community today.”

4 thoughts on “St Mark’s is a listed building”