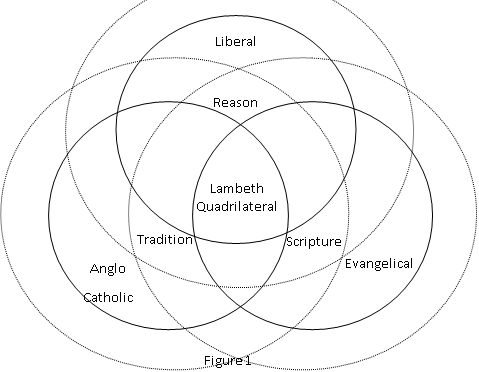 A couple of weeks ago I wrote about how the Church of England was founded on Hooker’s Three legged stool.

What I did not do was to look at how this has influenced the CofE to this day. 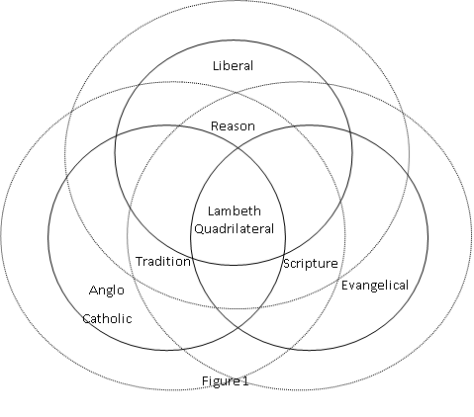 I devised the diagram above as part of an essay in response to the question: “Is there (should there be?) sufficient breadth within the Church of England for Evangelicals, Anglo-Catholics and Liberals to co-exist in a way that is mutually supportive and fruitful?”, and the explanation was: “Figure 1 shows that there are things which all three traditions hold to, that there are things which they will share with one but not both of the other traditions and there are things that only one tradition holds to. In addition the more widely drawn dotted circles show that different traditions will consider themselves in communion with different groups of people. This shows that there are some within each tradition with whom others would not consider themselves in communion.”

What the diagram is not saying is that liberals only use reason, evangelicals scripture etc, but that that would be their primary focus.

Since I wrote that essay (about 10 years ago) it might now be sensible to add a fourth leg and turn it into a tetrahedron with experience and Post Modern as the new bits of text.

Also since I wrote the essay the issue of Women Bishops, and the five guiding principles have come up, and this has raised the whole issue of being in communion, or impaired communion with each other – which is not a new issue.

Personally I want to support a “big tent” view of the Church of England, including in even those who would rather throw me out.  It is perhaps easier to hold this view if, like me, you hold that truth is difficult to pin down, and that my views are subject to change, rather than that truth is truth and you know what it is.