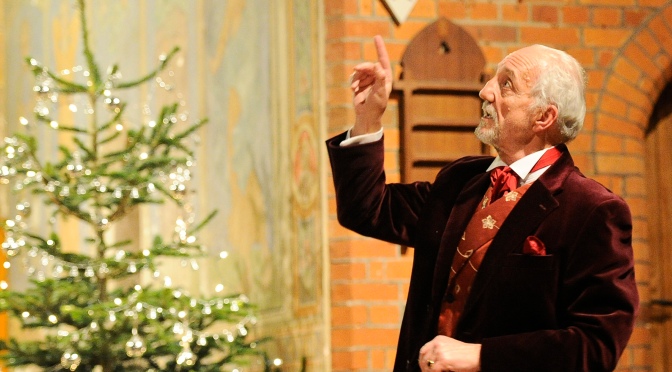 There is something magical about a good story and there are few storytellers as good as Charles Dickens. When he published A Christmas Carol he wished that it would “haunt (our) houses pleasantly”, and that “no one (would) wish to lay it”. The power of his storytelling was that, 172 years later it is still haunting us most pleasantly and far from laying it, we call up its spirit again and again.

The magic of the tale kept an audience enthralled on the evening of December 5 at a one-man rendition given at St Mark’s Church in Hale, Farnham. To be fair, it was not just the tale that had us spellbound, it was the way it was told by Jonathan Jones, who is often seen around Farnham in his guise as Town Crier. On that Saturday he had cast off his green crier’s coat in favour of a red velvet jacket and sat comfortably in an armchair in front of the altar. From here, though he did not stay seated for long, he told us the tale of Ebenezer Scrooge, Bob Cratchit, Tiny Tim, nephew Fred and the three Ghosts – Past, Present and Yet to Come.

It is a famous story which plays unashamedly with our emotions, and Jonathan drew on all its clever devices so much so that I actually found a tiny tear in my eye for dear Tiny Tim, and though I knew the ending well, I was still relieved when… spoiler alert… Scrooge saw the error of his ways.

All of this was told without a note, an impressive feat of memory and acting, with differing voices and even conversations between characters, all the more impressive given that Jonathan is not a professional actor.

After an interval during which mulled wine and homemade mince pies were served, Jonathan was back in his armchair with a set of Christmas poems and stories. He had done his research and gave us the background to poems such as The Night Before Christmas – originally A Visit from St. Nicholas, and written by the American Clement Clarke Moore in 1822. Not all the offerings were as schmaltzy as this one, not certainly the tale of Jabez Dawes, as told in Ogden Nash’s The Boy who Laughed at Santa Claus, nor the truly funny Twelve Days of Christmas by John Julius Norwich which details the rapidly declining romance of Edward and Emily.

The evening was held to raise money for another Emily, likewise in decline, this time Emily, the 103-year-old organ at St Mark’s which is in desperate need of a complete overhaul. The fundraising was clearly important, but what felt equally important was the community coming together for an evening of entertainment in a village venue that seems well suited to such events. I look forward to more soon.